BTS to perform face-to-face with 100,000 people in Busan on October 15th... The dormitory is already sold out

[Seoul=Newsis] Reporter Jae-Hoon Lee = The global super group 'BTS' has confirmed the date of the concert to wish for the '2030 Busan World Expo (Expo)'. 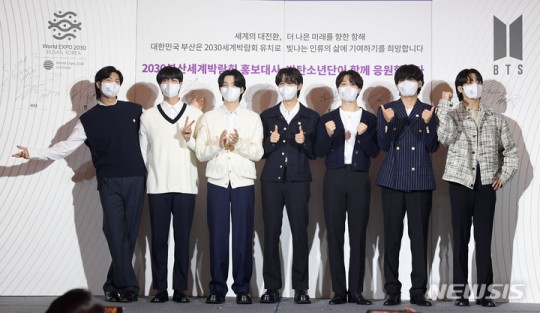 According to the agency Big Hit Music on the 24th, BTS will perform 'BTS in Busan (BUSAN)' on October 15th at the special stage in Ilgwang, Gijang-gun, Busan.

This face-to-face performance, held on a special stage in Ilgwang, Busan, attracts 100,000 people. 'Live PLAY', which is set up in the outdoor parking lot of Busan Port International Passenger Terminal, is for 10,000 people.

It is the largest concert in the history of BTS in Korea. Previously, the performance that BTS gathered the largest number of spectators per episode in Korea was the stage at the Olympic Stadium. It was performed here in August 2018, and 45,000 people gathered for each episode. As for the presence of BTS, it was enough to receive more people, but it was a result of considering the stage layout and safety.

This performance, which can be viewed in various ways, including face-to-face performances and live play, as well as online live streaming, will be held free of charge. The method of selecting spectators will be announced at a later date.

As soon as the date and location were announced, the main accommodations in the Gijang-gun area were almost sold out. There is also the BTS fandom, ARMY, who testifies online that the cost of some hotel accommodations soared by more than 100,000 won in one day. In addition, major hotels near Busan Station are also running out of rooms. KTX October reservations have yet to start, but this is also expected to be a fierce battle for ticket reservations.

Although the '27th Busan International Film Festival' ended on October 14, the day before the BTS concert, it is likely that film festival audiences will remain in the area on the weekend, so Busan will be quite crowded on the day of the performance.

The venue for BTS's performance this time was not originally used as a concert hall. It is the site of the old Korea Glass Busan factory, and it seems that there will be quite a few difficulties in setting up the stage. There is no transportation to get to the entrance. Nevertheless, it is estimated that this location was chosen because it was difficult to find a site that could accommodate 100,000 people.

With this BTS concert as an opportunity, once again, it seems that voices about opening a K-pop-only concert hall that can gather tens of thousands of people in Seoul or Busan, Korea will be strengthened.

BTS, officially appointed as ambassadors for the 2030 Busan World Expo, plans to carry out various promotional activities, starting with the global concert 'BTS in Busan', in order to gather people's interest and support for the Busan World Expo 2030.